In Greece, even teachers make homophobic remarks about LGBT students 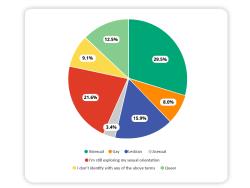 15 March 2020 - The Greek LGBT youth organization Colour Youth did a school climate survey and concluded that the situation of LGBTI using Greek schools is still deplorable. A majority of students here that even teachers use homophobic slurs to watch LGBTI students. The results are not surprising, previous research shows similar findings. But it seems the Greek government is hesitant to implement concrete measures to stop the blatant discrimination.

Discrimination due to gender stereotypes

One in three sexually harassed

One in three students was verbally harassed due to their sexual orientation (32%), gender (31.1%), and/or gender expression (50.3%). About one in seven children have been subjected to some form of physical harassment and/or physical violence in relation to their sexual orientation (14.6%), gender (12.6%), and/or gender expression (19.3%). One in three LGBTQ students (33.0%) state that they have been sexually harassed. Of the people who have experienced violence at school, 27.9% have never mentioned it to teachers while the ones that reported it state that the way it was not little effective (30.8%) or not at all effective (26.6%).

It should be noted that 59.2% of the respondents declared that they have experienced awareness campaigns on school bullying. Still, 65.1% of LGBTQ students have never heard anything positive about LGBTQ people in a school class. On the contrary, 54.4% state that they have heard negative references to LGBTQ people or issues in the classroom. 60.1% of the students report that none of their school books include information on LGBTQ issues. 57.7% the children feel that it is hard to talk about LGBTQ issues in the classroom, and they feel a little or not at all comfortable to talk to their teachers (71.9%) and hardly at all comfortable to talk to the school management (83.1%).

it was recommended to establish a Gender and Sexuality Office within the Ministry of Education por the Educational Policy Institute. Such an officer should establish and implement a range of measures to prevent bullying and give attention to sexual diversity in the curriculum. In the short term Colour Youth says it is important to issue a specialized circular from the Ministry to the schools in order to clarify the framework of LGBTQI+ students' rights that is. Apparently this is unclear for teachers and school managers until now.