A cactus in the tulip garden: sexual diversity in pedagogical communities 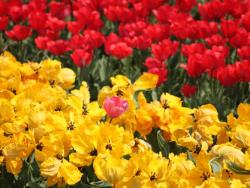 23 December 2019 - The ALICE-project for prosociality in schools expects that prosociality, antibullying and non-discrimination can only be effective when it is supported by a joint pedagogical view of the school, the parents and community organizations. The project proposes that school develop a joint Agreement of the Educational Community or Peace Code with parents and community organizations. In this article, we review the attempt in the Netherlands to make such a link between schools and the community. It turned out to be a challenge.

An Agreement of the Educating Community

The ALICE-project aims to improve prosociality skills. The partnership defines prosociality as a positive reciprocity among social groups. The local pedagogic community should undertake joint actions to stir up creativity and cooperation on common goals. Such initiatives of course should include jointly combating sexism, homophobia and transphobia.
The partnership imagined the local community to consist of local authorities, local youth support organizations and civil society organisations such as sport organizations, youth associations, churches and special interest NGOs. In the ALICE-project, it was planned that 12 pilot schools in 5 countries would formulate and sign an Agreement of the Educating Community. The Agreement would articulate how the school and the local community view prosociality and how they promote it by joint actions.

A school in a disadvantaged area

In this article we look at the two Dutch pilots, which were not very successful in creating such communities. One of the schools has a student population from disadvantaged areas of a small city. Some of the students spend considerable time in a street culture, which is quite rough, sexist and borders on the criminal circuit. The school aims to teach middle class values. The schools thinks students need skills as politeness, planning and tolerance to be able to find a job. This is not always easy to do with students with street values and with other cultural backgrounds than the “white” Dutch local culture. Despite the aim to teach 21st Century Skills, the school regularly has to resort to strict disciplinary and monitoring practices to ensure the pupils “behave”. This creates an ambiguity in their relation with pupils: on one had they want to teach empowerment, on the other hand they want to control the students, but they know they can’t always. The school’s safety coordinator advised parents of a “soft” boy to choose another school, because “in this school he might not make it”. Most parents do not have much contact with the school. The more traditional parents expect the school to assure students get a diploma. They see that order and discipline is necessary for this. But they may not see the need to combat homophobia or even agree with homophobia.
Organizations in the school environment also had a variety of views. Some school support organizations shared the school’s middle class values and aimed at 21st century Skills. But their legal mandate to support the school did not allow them to make “community” agreements. On the other hand, the local police officer said that local youth had to be strictly controlled to prevent them to fall into petty crime or worse. The officer said the school had to choose either for the “current fashion of 21st century skills” or for a strict discipline. Other organizations, like the municipal health service, football clubs or the local LGBT organization, were focussed on promoting their own products, each with their own implicit pedagogy, but they did not have time and did not feel able to become part of neighbourhood community building. For example, the local LGBT organization offered peer education sessions, but did not feel responsible for helping schools to become more safe beyond offering their won product. On the contrary, they refused to cooperate with another organization that had been consulting schools to combat homophobia for the last six years. This mainstreaming project had to be given up because of the lack of support by the local LGBT movement.

The other pilot was done in a democratic school. In democratic schools, all decisions are made jointly by students and staff in a school assembly. A staff member said: “Sharing, helping, supporting and giving empathy are part of learning in our school community. We see some bullying, excluding and polarization here as well, but it is mainly when new students come into the school and bring in the habits of the regular school-system. It takes some time, but usually such negative behavior fades out after a while.”
This school uses the vision and techniques of non-violence of Marshall Rosenberg to deal with conflict. This comes down to sitting down and having a dialogue about feelings and needs, until the bad feelings and the conflict are resolved.
This school was not ambiguous at all in her pedagogic vision. The combination of democracy and non-violence gave a very clear focus. There was hardly any bullying in the school. Differences between students were accepted. Shortly after the ALICE-lessons, a student filed a motion in the school assembly to designate the toilets as gender neutral. This was done immediately after the meeting and welcomed with applause of the students.
Still, it was a challenge to create an Educational Agreement of the “community”. The school recruited her students from a wide area and actually had very little connection with the village where it was located. Many parents came from far to bring their child to this school. Although this was rather extreme for this school, in a way it resembled other Dutch high schools because most of them “specialize” in a pedagogy, a skill or a kind of identity. This limits their link with the local community and attract students from a much wider area. The reasons for this specialization is that schools have to compete to get students. The number of students secures their funding.
In the end, the democratic school did adopt an Agreement, but it was only on behalf of the staff, students and parents. It proved to be impossible to engage a wider community because that did not really exist.

The exploration of how to make an Educating Community Agreement showed there are structural forces in the Netherlands making it difficult for youth domain stakeholders to engage on a joint pedagogy with schools. Most secondary schools recruit their students from much wide areas than local communities and in local neighborhoods the sense of community is often weak The most logical school partners like the inspectorate, student attendance officers, the police, the health service and the school support for special needs all have well-defined legal mandates to interact with schools and these mandates and procedures prohibit or make it very difficult to make individual of sign formal agreements with schools. Most other NGOs are often volunteer clubs or small companies, which don’t have the time or ambition to engage in a dialogue about pedagogy. In short, political and organizational choices limit the way stakeholders can create a community. The idea that young people should be supported by adults with a more or less coherent pedagogical vision seems nice and needed. The question is how to stimulate and support this a vision and cooperation in fractured societies.

The thorny case of sexual diversity in the community

In addition, there remain questions as to whether defining an agreement with local community is the best way to support LGBTI students. In the case of the democratic school, combating homophobia and transphobia is no problem, because any difference is accepted and appreciated. But in the case of the vocational school, even raising the topic of homophobia was difficult, although the school supported open discussion about this. And in some other countries, both local stakeholders and authorities sometimes object to even raising the topic of sexual diversity. In a Dutch article, this was called the “cactus in the tulip garden” effect. The diversity is great, but you walk around it because your fear to get hurt.
In situations where the local community is too conservative or too prejudiced, an effective ”community approach” may create a debate about the acceptability of teaching about sexual diversity. Even the tone of such a debate would make clear how unsafe the situation for LGBTI students really it, but it would not ensure that inclusive prosociality would prevail.
So in may cases, authorities, schools and even LGBTI supporters may tend to keep silent about sexual diversity. They may see that high school students may “not be ready” for it (while they do seem to be ready to learn about heterosexuality and stereotypical gender expectations). Or they may say that the community is not ready for it and that it needs “time”. In Europe, it has become intolerant to be openly homophobic. But it is still possible to block inclusive prosociality by blaming the resistance of others. The respect for or fear of the homophobic “others” prevails over an active prosocial stance.

A personal note and question

Personally, I have worked now for 40 years in the area of sexual diversity and schools, and I have heard these “modern homophobic/transphobic” arguments each year. The arguments haven’t changed in the last 40 years. The people using them are usually not open for discussion on how to improve their schools. LGBTI people just have to wait and if we don’t, we are labelled provocative and unprofessional. Cognitive arguments against “modern homophobic/transphobic” arguments don’t help. Covered beneath the arguments lies a sense of insecurity, fear, and sometimes own resistance. “They are not ready” functions as an emotional self-protective shield against having to “take risks be really prosocial”. Even after 40 years, for me the question remains: how can we engage these potential but scared allies in creating true inclusive prosociality?

The ALICE-project is a European project supported by the DG EAC, Erasmus+, Key Activity 3: Support for policy reform – Social inclusion through education, training and youth. The European Commission support for the production of this article does not constitute an endorsement of the content, which reflects the views only of the author. The Commission cannot be held responsi¬ble for any use which may be made of the information in this article.