Prosociality and fighting SOGI-phobia in traditional and democratic schools 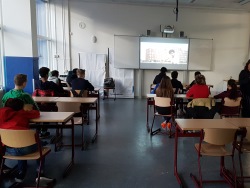 18 December 2019 - In two pilots in Dutch schools, GALE experimented with introducing a curriculum on prosociality. Prosociality includes fighting discrimination. The two pilots in a very traditional, disciplinary school and a radical democratic school worked out very differently and raise a lot of questions about whether combating SOGI-phobia and promoting prosocial behavior is even possible in more traditional school systems.

The pilots were carried out in the context of the European ALICE-project. This project aimed to develop a pedagogy which promotes and sustains “prosociality”. Prosociality is not just being nice to each other. Kristen Dunfield conceptualized it as the will and skill to help each other, share resources when needed and comforting each other when you are in emotional distress.
Although this sounds an obvious and generally supported way to interact with each other, in practice this is by no means easy. In the first place, it is not always clear people need help, resources or comfort. In the second place, people may not want to do this for various reasons. In the third place, people feel not know how to do although they have the motivation.
Especially when people have to deal with discrimination or exclusion, of themselves or others, this may be difficult. Personal, social and cultural factors play are role. The GALE pilots explored how such mechanisms payed a role in different types of schools.

Working in a total institution

The two pilots were carried out in two schools who had extreme perspectives on prosociality. One school was a school for students who are expected to choose a low-skilled vocational occupation. The school attracts a multicultural population from mostly lower-class backgrounds. Language skills are lower than the Dutch average and many students live partly in a “street culture”. Teachers want to create safety in class by ensuring the students were patient and polite with each other. The school wants to promote 21st century skills, but at the same time exerts a strong discipline in which students are strictly monitored in all their behaviour. This is what Ervin Goffman called “a total institution”. The students themselves agree with this discipline. When asked if they should learn how to make own choices, one student said: “no, because later I will get married and my wife will control me”. This context made it difficult for teachers to teach middle class perspectives on prosociality. In practice, this meant the maximum goals we could reach in this pilot was to work on basic skills like listening, not interrupting and to accept that violence is not a societal accepted way to solve disagreements. Being friends with LGBTI peers turned out to be very difficult due to the street culture and because of traditional values of Muslims students. Students agreed it is impossible to be openly gay in this school, but they accept this as “normal”. They also agreed on very strict traditional gender norms and stereotypes. Class activities on this were very challenging because of strong groups norms on this. At the same time, one student could casually tell about his niece, who recently changed gender. In the “live and let live” street culture, this was heard but not commented on. As long nobody was forced to take position, students could avoid losing face and there was no reason for conflict.

Working in a democratic school

The other school was a democratic school with a strong emphasis on non-violent communication (Marshall Rosenberg). “Democratic” means that in this school, students and staff decide about everything together in weekly joint meetings. Students are not obliged to attend lessons and they are expected to develop their own learning pathway. Disagreements are solved through structured dialogues which explore feelings and needs. Partners discuss this until they fully and authentically agree. As a consequence, there is no “discipline” in this school. Moreover, the whole concept of discipline is seen as violent communication and oppression of young people by adults.
The pilot in this school was also challenging because the students were quite critical of the goal of having to learn prosociality. A student said: “who are you to tell me what prosociality is? I have encountered marginalization all my life and I don’t need to do games to understand exclusion”. Students also rebelled again set the set format of ALICE-lessons and activities. The school teacher and the ALICE-consultant had to renegotiate both the didactic approach and the content with the students. The prime interest of students was “sex and relationships”, so we changed our focus to this. The students were very willing to learn about how to talk, interact and help each other in both simple and complicated situations that were related directly to their psychological and sexual development. In the re-established more equal relationship between teachers and students, the teachers also learned some new things about sexuality, especially how students learn interesting but also skewed information from internet.
Sexual diversity was no issue in this school. Several girls labelled themselves lesbian, bisexual or pansexual. At the end of the ALICE-lessons, one girls suggested to make the toilets “gender neutral”. She lodged a motion to the weekly meeting and then proposal was well received. Immediately after the meeting a host of students and teacher walked to the toilets to take the “boy” and “girl” pictures of and – with applause - to replace them with a temporary “gender neutral” label.

Reflection on prosociality and anti-SOGI-phobia lessons

After the pilots, the teachers and trainers wondered about our implicit expectations of “prosociality” and about the adequacy of “anti-SOGI-phobia lessons”. Is prosociality an expectation that students should be more polite or tolerant or respectful ? How does prosociality relate to street culture and group power relationships? Can prosociality and anti-SOGI-phobia lessons really be taught in traditional schools were strict discipline creates a lack of authentic learning? How can we better link with their learning needs rather than force our goals upon them?
The pilots gave plenty food for thought. They gave some answers too, but it was clear that the answers are strongly dependent on the school environment. If there is one conclusion from the Dutch pilots, it is that both schools and the LGBTI movement need to reflect more deeply on what students truly need, and what teachers need to engage in true transformative education.