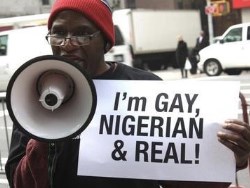 31 August 2019 - A recently published study in the Journal of LGBT Youth on university students in Nigeria confirms generally homophobic attitudes. But at the same time, the interviewed students admit to being able to see lesbian, gay, and bisexual students as humans when they look beyond the aspect of their sexual orientation. Researcher Okanlawon recommends to offer heterosexual students sensitivity and anti-prejudice training and to train teachers to acquire positive pedagogical competences to offer such education effectively.

The study is based on a focus group discussion with 5 female and 6 male heterosexual undergraduate students (19-24 years old) from the Obafemi Awolowo University (OAU), Ile-Ife, Nigeria.
Six themes emerged from this study regarding the perceptions and attitudes of heterosexual students towards homosexuality and LGB persons. The six themes which emerged include: (a) higher tolerance observed for lesbians than gay men among heterosexual men; (b) Possibility of biological cause as an explanation for incomprehensible behaviors; (c) assumptions of social and environmental factors as influencing homosexuality; (d) assumption that gays are sexual abusers and the fear of gay men and lesbians; (e) suggestions on rehabilitation of LGB people through conversion therapy, and (f) positive perceptions about homosexuality and LGB persons. Multiple participants supported each of these six themes. Except the last one, such perceptions reflect “traditional” African perspectives on LGBT people, as well as seeing sexual diversity and defending LGBT issues as a form of Western colonization (despite sexual diversity being a clear part of pre-colonial African history and sociology).

Kehinde Okanlawon was smart to not limit himself to looking only at negative aspects. He also asked students if they saw any positive aspects of LGBT people. Most students mentioned some aspects, ranging from sexual self-awareness and skills due to knowledge about their own body, being more happy because you follow your own choice. One participant said: “When you look beyond their sexual orientation, they are intelligent and smart people who can invent things. They have benefits to the society if you look beyond their sexual orientation”.
Okanlawon concludes that, despite negative attitudes, sensitivity training on sexual diversity for heterosexual Nigerian students can make a case for the need for compassion for LGB students. As a researcher, he believes that sharing studies about LGB experiences could be an effective tool in such training. Given the serious homophobia and negative attitudes towards homosexuality among Nigerian students, he thinks it is essential for teachers and lecturers to acquire pedagogical skills on sexual diversity and gender issues and how to use these in their teaching. Misperceptions like the belief that conversion therapy is an effective remedy against same-sex feeling, should be corrected.