Convention against discrimination is 60 years old, but still undervalued 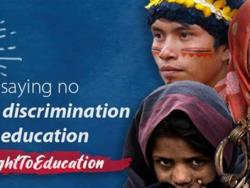 On 14 December 1960, the UN adopted the Convention against Discrimination in Education (CADE). It was first and still the only legally binding international treaty exclusively dedicated to the right to education. UNESCO celebrates this anniversary with a 4-day campaign “Say no to discrimination in education”, which starts today. The campaign is badly needed. To little attention is given to discrimination in education. The global trend of polarizing attitudes, the rising number of states that implement totalitarian measures, ongoing war and the COVID-19 epidemic exuberate the risks of discrimination for the most vulnerable students. Increasingly, non-discrimination is seen as a “left-wing” hobby of softies and as secondary to “hard” economic needs.

The anniversary coincides with the 10th Consultation of Member States on the implementation of the Convention. But the consultation is riddled with problems. In the first place, only 52% of the UN Member States have approved the convention. Member states are requested to submit reports of their policy measures every four years, but many don’t do this.
In the questionnaire that government are requested to fill in for the consultation, the attention for discrimination is limited. Specific questions are only on gender, cultural minorities, refugees, and disabilities. Other discrimination grounds are subsumed under “children in vulnerable situations”. Attention for gender is asked with a heteronormative perspective and LGBTI students are not mentioned. Very few government report on LGBI issues in their reports.
In many other UN conventions, NGOs are involved to some extent in the monitoring process. One would expect that UNESCO would do the same, certainly in view of the many NGOs combating discrimination and the number of states actually promotion and sustaining discrimination in education. However, NGOs hardly have a place in the consultations on CADE. If they press UNESCO, they may be informed about the dates of the procedure, but there is no possibility to submit shadow reports to UNESCO. This is worrying, also in the context of non-discrimination NGOs already finding it very difficult to use the legal system to address discrimination in schools.

Sources: Convention Against Discrimination in Education (CADE); UNESCO Consultation on the CADE, guidelines for country reports for the 10th consultation, Global Observatory on the Right to Education, Racial discrimination in education and EU equality law