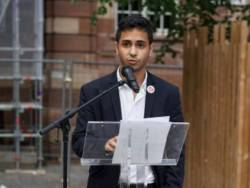 October 28, 2015 - The youth representative of GALE at the UNESCO Youth Forum struggled to include sexual diversity in the final recommendations. It is only a few years ago that UNESCO deemed LGBTI issues an "extremely sensitive issue". This is now slowly changing. Omar Didi did not get all the recommendations he aimed for, but at least one. "At the next youth forum", he says, "we need to go with more LGBTI young people."

UNESCO has an annual global youth forum, where priorities for youth policy are recommended. The 9th youth forum was held in the end of October, in Paris. There were over 500 young women and men from all over the world, including Omar Didi. Omar has been long active in the French LGBT youth organization MAG Jeunes LGBT. He came to the forum as a representative of GALE. The forum focused on Climate Change and the post-2015 Sustainable Development agenda.
After the official speeches five young inspirational change makers shared their stories about youth can engage in the discussion about the post-2015 Sustainable Development goals. One of them was an LGBTI activist: Gautam Yadav. He spoke about his personal story in India, being HIV positive and getting involved with civil society to make a change. It was one of the first times an LGBTI activist had the floor at a UNESCO big scale event. This proved how the UNESCO commitment to further advance LGBTI rights is growing.

The first day was organized as a "Future Knowledge Laboratory" which is an innovative and inclusive process that helps people make sense of a complex world. This discussion process works like a microscope. It assists participants to better understand the assumptions they use to imagine the future. The participants were divided in small teams were they thought of their visions of 2040. Then they focused on more concrete ideas for the future.
GALE representative Omar Didi was assigned to the subgroup Rights and Freedom. But after a short time it became clear to him there would be also opportunities to get a formal recommendation in another group, the Diversity group. So he was going up and down both groups. It was difficult to make a real impact on the usually very broad recommendations. At the end of the first day, Omar started to feel a bit desperate.

During the morning of the second day Omar was able to meet Gautam Yadav to have his support and insight on further proceedings. Gautam joined him in the subgroup Rights and Freedom. They went to see the main facilitator of the group. She advised them to go see a group of four young people who were really serious about human rights and inclusive quality education. This group accepted to have their expertise on the main recommendation that they were writing. They were in luck as the recommendation about education was still in a stage of draft. Omar was very active in lobbying and managed to get included in the European Delegates Group. This group also keeps on meeting after the forum.

One LGBT recommendation among thirty

At the end of the conference, thirty recommendations were presented. These was one mention of LGBT. This was the recommendation Omar and others had worked on in the Rights and Freedom group. The recommendation in the official text is: "Dramatically increase and improve allocation of resources in the education sector to accomplish SDG 4: Ensure inclusive and equitable quality education and promote lifelong learning opportunities for all. Ensure access to safe learning opportunities for all marginalized groups including all gender identities, the LGBT community, migrants, and indigenous peoples."
To Omar's disappointment, sexuality education was not mentioned at all in the recommendations of the Diversity group. This was partly because Omar could not lobby in two places at the same time. But there was also another reason. In some groups, the recommendations were made in a democratic process with a say of all participants. But in other groups, like the Diversity group, the facilitator behaved like a dictator and forced his own text. This was not the only group were this happened. So many Forum participants were not happy about the process of the Youth Forum. The participants wrote a letter about this. They recommended a more democratic process in the next UNESCO Youth Forum. Hopefully this will be taken into account for the next forum. This will be in 2 years from now.