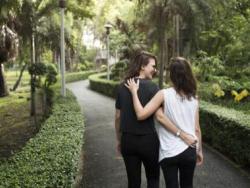 September 4, 2019 - The European ALICE-project published a manual on how to educate about prosociality in high schools. Prosociality focuses on a positive approach rather than an "anti" strategy. The manual explain in depth how schools can implement such an approach, in the school and with the wider community. Although "prosociality" sounds innocent and acceptable to all, the concept proofs to be quite radical if implemented fully. This was even shown in the ALICE-partnership that produced the manual, where the diversity chapter has to be removed from the manual after protests of a partner from a more conservative country.

The ALICE-consortium produced a 160-page manual, which gives information on the background of prosociality, on how to apply it in schools and in communities and how to deal with diversity and polarization. The manual includes 18 class activities to use in lessons.
The ALICE-approach does not believe that lessons alone will be able to train prosocial skills of students. “It takes a village to raise a child”, one African proverb says. In the ALICE-approach it is recognized the teachers and even schools as a whole are not the only pedagogues in the live of young people. Their parents, sports coaches, police officers, religious leaders and youth workers may be important influences. The manual suggest how to involve them in the prosocial strategy of the school by interviewing them and working towards a joint “Agreement of the Pedagogical Community”.

Prosociality is radical in this era

The starting points and direction of the prosocial approach seem to be based on generally accepted principles of friendliness and openness. But in practice, some of the ways this is worked out in more detailed instructions can be more controversial and even considered radical. For example, it is promoted that students learn to reflects on their prejudice and it promotes critical thinking are a key skill. In many schools, critical thinking is promoted as an educational goal, but only when the students remain polite and within frameworks set by the teacher or by the school. This is also a reason why schools feel seriously challenged by polarization and radicalization. If the school does not have shared values and practices on this, it can easily lead to problematic communication between teachers and “radicalized” students. The manual suggests that democratic society should be role-modelled in the school. This includes a radical acceptance of freedom of opinion and equal treatment. But at the same time, participants in a democracy tolerate other opinions and don’t cross the lines of prosocial expectations, even when they don’t “like” people with other opinions or identities. This is even political controversial. In some European countries, populist parties started online reporting websites to report complaints about teachers who indoctrinate students in leftist ideologies. With leftist ideologies they refer to non-discrimination, equality, critical thinking and any criticism of populist propaganda.

That this is not easy, was even demonstrated in the ALICE-project team itself. GALE proposed that the manual required a chapter on diversity, because many schools don’t know how to deal with diversity questions. It was agreed to have such a chapter and GALE wrote a draft. However, one of the project partners – from a more conservative country – objected to the chapter because it was too radical and too elaborate on LGBTI issues. It was true that due to the expertise of GALE and the expectation that schools would be less ware of LGBTI issues, these paragraphs were longer than the ones on disability, Roma, immigration and culture.
In a second version, GALE adapted the chapter by editing the mention of “heteronormativity” into language that sounds less threatening to teachers in conservative European countries and made the paragraphs on gender and sexual diversity shorter. However, the critical partner remained critical. This time the partner used the argument that high school students were not yet ready for a discussion on LGBT-labels, and proposed to delete any suggestions to support self-awareness and personality development of LGBTI teenagers. This of course was unacceptable for GALE. In the controversy that followed, the project coordinator decided to take the chapter on diversity out of the manual and publish it as an optional addendum. It remains to be seen if the diversity chapter will be returned to the manual in the final version.