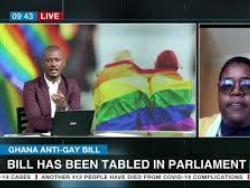 25 July 2021 - Yet another country has proposed legislation to censor any neutral or positive expression of sexual preference or gender identity. This time it is Ghana, where the government proposed a so-called “family values bill”. The bill proscribes “propaganda” and advocacy for “LGBTIQQIAAP” and related activities. The text of the bill is full of offenses and lies about LGBTI+ people to support the censorship. It proposes sentences of 3 to 10 years imprisonment for any visible education or advocacy activity, and even for forming an LGBTI+ organization.

According to the introduction of the bill, the opening of a support center for LGBT people in Accra was the inducement for the bill. The text claims that 5 national organizations protested the opening and called to arrest all people involved in the organization. The organizations claim that only heterosexist family values are “proper human rights” and that same-sex relationships are an offense for public morality. Although the anti-homosexuality legislation of the country seems to be a heritage of colonial times, the “traditional” protesters view sexual tolerance as unacceptable foreign influence.

The text of the bill claims that homosexuality is against values and traditions in Ghanaian society, which is a gross lie and a denial of the Ghanaian history. In the 18th and 19th century Asante courts, male slaves served as concubines. The Nzema people had a tradition of adult men marrying each other, usually with a 10-year age difference, and were called agyale (friendship marriages). Among the Nankani, there were female marriages to maintain the lineage. The Fante people believed that people with "heavy souls" were attracted to women, whereas those with "light souls" were attracted to men, with none of them being blamed for this. Homosexuality was only criminalized in Ghana in the 1860s. Although Ghana was never fully colonized by Britain, their anti-homosexuality legislation uses the same language as sodomy laws in British colonies. So it looks like Ghana is another ongoing victim of the mental colonization by the British. In 2012, the UN Human Rights Committee recommended Ghana to get rid of the discriminatory legislation, but Ghana refused.

A range of activists have voiced their surprise at the bill using the acronym “LGBTIQQIAAP”. Such acronym is mostly used by LGBTI + activists organizations who want to be very politically correct about labeling different subgroups of the LGBTI + population. The bill actually goes into details about how to treat persons with the different identities in different ways. In general, this comes down to the view that if people are not LGBTI + on purpose, they can be forgiven and should be offered “treatment”. They should even be protected against hostile acts from homophobic people - who officially can expect six months to 3 years imprisonment for homophobic harassment (clause 22).