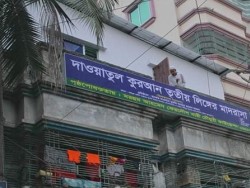 8 November 2020 - Sanjana Chowdury from the BBC reports that in Dhaka, a madrassa for third sex people has opened. It is the first religious school for transgender people to be opened in Bangladesh. Although right wing forces vehemently persecute gay and lesbian people in Bangladesh, third gender has officially been recognized.

Any age can enroll

When students already become aware they are transgender and come out, this usually leads to heavy bullying in school by both students and teachers. The drop-out is hight, and the effect is that most transgender people are illiterate. A separate school for transgenders is one way of amending this challenge. Next to learning to read the Quran, the students can learn basic skills in a madrassa.
More than 150 students will study Islamic and vocational subjects at the privately-funded madrassa (religious school). Although it is a private school, the education is free of charge. The madrassa is funded from the legacy of Ahmad Ferdous Bari Chowdhury, a businessman who wanted to educate the hijra community.
People of any age in the hijra community can enrol at the school. It is hoped that after studying there, students will have a chance to enter a number of different professions. The madrassa's education secretary told BBC that many third sex people only identify as third sex at a later age. This is why the school does not set an age limit.

Transgender or third sex people are called hijras in Pakistan, India and Bangladesh. Hijras transition from male to female. The government says Bangladesh has about 10,000 hijras, but some think there are five times as many.
Third gender is officially recognized as a gender since 2013. Legally, third gender people have the right to vote and to stand for election, but conservative social attitudes still make it hard for them to access jobs and education. In addition, in recent years there have been numerous attacks of Muslim conservative extremists, using machetes to hack people to death. LGBT activists were among the victims.
Many third gender people are ostracized in their villages and are forced to migrate to cities. Because it is difficult for them to get a regular job, they often have to support themselves by singing and dancing at weddings and births which does not earn enough to live on. The alternative is begging or sex work.