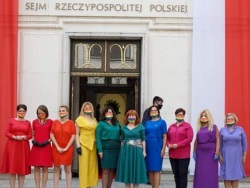 8 August 2020 - In the election battle, the Polish president Andrzej Duda vowed to ban all LGBT education in schools. He narrowly won the election and many fear the repressive policy of the last few years will now be implemented with more extreme measures. While parliament members protested by wearing rainbow dresses, flags and masks, some LGBT are already planning to flee the country.

President Duda ramped up his homophobic rhetoric kin June to jump-start his re-election campaign. In a pitch to his conservative base, he signed a ‘family values’ declaration that vows to “protect children from LGBT+ ideology” and prohibit the teaching of LGBT+ inclusion by public institutions. He finds a wide audience for such discriminatory claims. A large right-wing and populist newspaper has called for “LGBT-(propaganda)-free zones” and about half the Polish counties have adopted local statements to declare themselves “LGBT-free”. The Polish media have adopted a rhetoric condemning “gender ideology” and believe they support the (heterosexual) family this way. In reality they are creating rift in the Polish population. In addition, they are alienating themselves from Europe. The European Community has denied further funding to 6 Polish counties towns who upkeep discriminatory statements.

But the right-wing radicals of the governing Law and Justice party only see such action to stop discrimination as a flag waved for a frantic bull. They now see the rainbow flag as a symbol of all the things that they say pose a threat to Roman Catholic values and the nation’s identity. When radicals steal rainbow flags, trample on them or burn them, the authorities remain idle. But activists hanging rainbow flags on statues are prosecuted, because they “desecrate monuments and offend religious feelings.” This in turn has galvanized the opposition, who chose the flag as their emblem. For many, it represents now not just solidarity with LGBTI, but also a rejection of what they view as a government-led campaign of intolerance, hatred and xenophobia.