Vocational students exchange on how to trigger discussions on sexual diversity 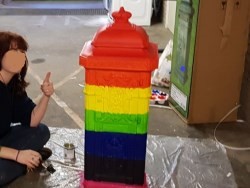 30 December 2019 - Students from European countries met in Greece to exchange ideas on how to trigger discussions about sexual diversity among fellow students. The meeting was exciting due to the cultural differences, but also because of the differences in sexual identities of the students. Most students decided to work on a video to trigger discussions, but some also had some additional campaigning ideas...

The 16 students came from Greece, Italy, Spain and the Netherlands. They were invited to take part in the exchange week in October in the context of the SENSE/My-ID project. The 5-day exchange was hosted by EUROTRAINING in Athens and facilitated by CESIE (Italy).
During the week, the students got acquainted. For most, this was the first time they travelled abroad and met students of other countries. Their cultural differences were noticeable in the meetings. Students from the Mediterranean countries were more shy at first and tended to wait till the facilitators told them what to do. The Dutch group was louder and more forward; they were used to speak their opini9on and to have a more horizontal relationship with their teachers.
Four of the six Dutch students were lesbian, bisexual, gay and transgender, while the students from other countries were (probably) heterosexual and cisgender. This also led to some “intercultural” challenges. Some cisgender students who never saw a trans student before could not help watching one of the trans students who looked pretty genderqueer. Or gender ambiguous as some would say, but which we don’t like to use because for person in question there is nothing “ambiguous” about them. Still, being looked this way at felt uncomfortable and facilitators had to talk to the students to make them aware of what was happening and how they could make the situation more comfortable.

The students were given a range of options on how to create triggers for discussions about sexual diversity. It was discussed that some students may feel uncomfortable with the topic and need to feel safe before engaging in a discussion. Others students may feel threatened and erupt with violent and prejudiced comments. How do you deal with these?
Also, you need to consider if you dare to engage in a discussion personally, as a peer educator or as a teacher. Do you feel safe and comfortable enough to do that? One way of making sure prejudiced comments ra not targeting the facilitators directly, is to use a video.
Students experimented with making a short stop-motion video. This also has the added advantage that the stop-motion effect creates a cartoon-like movie. This makes the confrontation with the topic less direct and this can lower the emotional impact.

After the exchange, most students teams had to rethink how they could best make a trigger on their own country. The Dutch team decided to make a stop-motion video showing avatars who’s life story was told. They also decided to start an information campaign. They bought a traditional post box and painted it in rainbow colors. It will be presented early next year. Students and teachers will be able to ask all their questions about sexual diversity. Under their avatar identities, the students will answer the questions anonymously though a website specially set up for this purpose. Next to the video, the questions will also be input to trigger class discussions.

For more information: SENSE/My-ID project and the second My-ID Newsletter