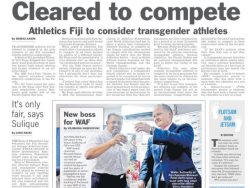 20 December 2019 - Fiji President Filimoni Vuli Waqa announced to local media that he would not be opposed to trans people participating in athletics events under their gender. He was commenting on potentially allowing transgender athletes to compete in the girls category of the Fiji secondary school athletics competition.

“I believe that every Fijian has the right to enjoy the benefits of sports and physical activities,” said Waqa, though he noted that there would be limits to this new policy, especially at the professional level.
“Athletics Fiji may allow younger trans athletes to compete in its local programs but the same could not be allowed for the same athlete in an international competition,” said Waqa, adding that international competitors would have to abide by IAAF. The IAAF recently updated its rules for trans and intersex athletes (see BBC).