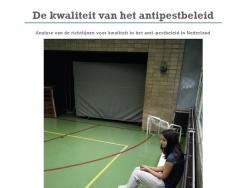 August 17, 2019 - The Dutch organization Edu-Diverse published an analysis of antibullying policies in the Netherlands today. The analysis of 40 pages concludes that much improvement is still possible. Schools are only to do research, have a plan and a coordinator, but there are no substantive criteria for quality. Edu-Diverse states that the neoliberal Dutch policy means that schools regulate themselves and that the possibilities for individuals or social organizations to help improve the quality of antibullying policies at school are very limited. Still, it suggests some ways to improve the situation.

The analysis was carried out together with the Global Alliance for LGBT Education (GALE), which is participating in a European project in which an antibullying certificate for schools is being developed. It is clear that certification of schools by any external foundation or association will not make a significant contribution to improve the quality of the entire education sector. Therefore, one of the components of the project is to start a discussion in the participating countries about introducing an antibullying label to schools. To inform and stimulate this discussion, an analysis is made of the situation in each country and recommendations are made for improvement.

In the analysis, Edu-Diverse and GALE devote a chapter to “effective elements”. These are aspects of antibullying policy that research has shown to contribute to a major impact. Most schools and politicians are unaware of those elements, so the discussion remains on a superficial level. This challenge is not restricted to the Netherlands, but plays a role in many countries. Edu-Diverse and GALE advocate a more evidence based approach to antibullying. Schools and politician should rely less on personal opinions or pressure from special interest organizations. For example, in many schools and policies, punishment still plays a major role even when research shows clearly it has mostly adverse effects. It is also clear that many policies only focus on incidents and commonly don’t recognize the social context. For example, gender-based violence and homophobia are often not seen as part of antibullying policy but just as a topic for incidental and additional lessons. This approach is not enough to stop prejudice and bullying behavior.

According to Edu-Diverse, the biggest stumbling block for effective Dutch antibullying policy is that all important partners (the ministry, the school board federations and even the trade unions) are opposed to substantive requirements for schools. As a result, agreement can only be reached on "empty" measures such as conducting research and making a plan, without there being any demands on the quality of research, the plan or the implementation. It is recommended that despite this national neoliberal consensus, key actors should look for a more evidence based policy and criteria for effective school policies.
Regarding the lack of attention for diversity in tackling bullying, Edu-Diverse recommends that diversity should become be a structural point of attention in antibullying policies.
The Dutch school board federations maintain web-based database which is intended to showcase the quality of the school policies of their members. Edu-Diverse recommends that the page on school safety can be used as a benchmarking tool for good antibullying policy. For example, schools could be asked to show how they include effective elements of antibullying in their school safety plan.

The Quality of Antibullying Policy (Dutch, with English summary)