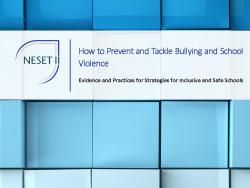 4 February 2017 - On 23 January, the second NESET report on bullying in Europe was presented at the European parliament. The report offers an extensive analysis of anti-bullying programs and strategies on both school, community and government levels. It also includes information and sensitivity to homophobia and to other selected groups that are commonly neglected in anti-bullying strategies. The report recommends to create national committees that guide a national comprehensive anti-bullying strategy and to systematically include attention for discrimination and homophobia. This article offers a summary and highlights the anti-homophobia aspects.

The aim of the NESET report is to inform policy-makers and practitioners at EU, national, regional and local level on the most effective strategies and practices for preventing bullying and violence in schools across the EU. It examines evidence from European and international research, reviews national practices and the work civil society organizations with regard to school bullying and violence.
The report concludes school bullying takes many forms. These include discriminatory bullying against minority groups, homophobic bullying and bullying against students with special needs or any student who seem vulnerable for his or her peers. There is a clear gender difference in school bullying trends in Europe, with the rates of boys being higher than that of girls in most of the countries. Both victimization (being a victim of school bullying) and perpetration (being a person bullying others) are more common among boys.
The prevalence of bullying varies considerably across Europe. Lithuania, Belgium, Estonia, Austria and Latvia are some of the countries with relatively high victimization rates between around 20% and 30%1, compared to the lower rates of Denmark, Sweden, Czech Republic, Croatia, Italy and Spain below 10%. This implies that national cultures and/or policies do make a difference. In the countries with more bullying, homophobia and other forms of discrimination are also significantly higher than in other countries.
Bullying perpetrator rates increase significantly from 11 to 15 years. In most European countries the increase is relatively small but in a few countries it is more than 10 % points amongst boys (e.g., Latvia, Greece, Austria, Luxembourg).

Bullying can be a complex problem to solve. It requires a comprehensive, multidimensional approach. In most European Member States there is a lack of a systematic approach. Among the 27 surveyed countries, there are only 3 that integrate homophobic bullying in their anti-bullying strategy and 3 others that note that homophobia is only in the non-discrimination strategy. The report concludes that the prevention of discriminatory bullying in school (against groups such as Roma, minorities, migrants, as well as against those experiencing poverty and socio-economic exclusion) needs a stronger strategic focus in most EU Member States. In addition, cross-departmental policy synergies between education and health are needed for more effective preventions of school bullying. The report shows that educational approaches are usually too generic and not targeted enough. Ministries of Education and teachers can learn from health theory, the Ministry of Health and of health professionals.

The report offers an extensive overview of anti-bullying programs, school and government policies. These good and less good practices do not endorse one particular model, but they highlight some key features of successful interventions. The most effective program elements associated with a decrease in bullying others are:

The report notes that discriminatory bullying requires challenge through a democratic school culture promoting the different voices of students. Young people who are part of minority or excluded groups must help design concrete curricular resources that address bullying and prejudice. The report specifically calls to include LGBT youth voices to be involved in the development and implementation of curricula on social-emotional skills and anti-bullying strategies.

Schools are not islands in the community. They are an integrated part of it and effective ways to challenge bullying require strategies that reach out to the local community level as well as to national cultures of violence and exclusion. In the local community, such a strategy can be to share communal spaces. This brings different groups together. Such spaces can be lifelong learning centers, arts and sports facilities, libraries, green spaces, community after school centers, family resource centers, religious centers and gyms. Another key strategy is to really involve parents and families in the school. Not only by informing them, but asking them to co-develop the anti-bullying strategy and actively help to carry it out at school, at home and in the community.
On the national level the report identifies 4 key success factors:

Sources: presentation of the report in the European parliament by Anna Maria Corazza Bildt, up, published 24 January 2017, 19:43, the NESET-II report, see also the elaborate summary and a selection of relevant quotes by Peter Dankmeijer