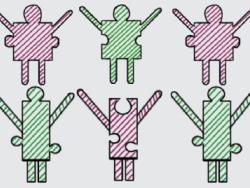 30 June 2021 - An international alliance of LGBTIQ organizations has drafted a “feminist affirmation letter” in which they affirm their belief that the fight against homophobia and transphobia is rooted in combating patriarchy and hetero sexism. GALE signed the declaration and adopted it as a lead for its gender policy. GALE heartily supports the call for other organizations to sign the affirmation letter.

Human rights for all

The affirmation reinforces and defends the place that trans, intersex and nonbinary people have alongside many others in feminist movements. It underscores the recognition that human rights do not distinguish between persons, they are, in their construction, universal, indivisible and inalienable. In this way, it affirms that the realization of the human rights of any one group of persons does not come at the cost of the rights of any others. These shared principles and values have united diverse feminist movements everywhere.