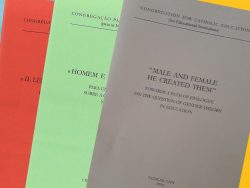 12 June 2019 - Almost 1100 organizations and organizations have signed a joint statement condemning a new Vatican guidance to schools. The guidance forbids schools to teach that gender can be chosen or to allow students to live according to their chosen gender. Despite officially calling for dialogue, the Vatican polarized the discussion by publishing the document amid the pride month.

The Vatican said it was important to listen and “understand cultural events of recent decades” but did not mean this in a sensitive way. It described the discussion of gender a crisis in sexual education. The Vatican calls a modern gender perspective a disorientation that is destabilizing the family and canceling out differences between men and women.
The church also sneered again at gay and lesbian families by stating that children had the right to grow up in a family with a father and a mother. The guidance quoted an earlier speech by Pope Francis about how children benefit from seeing masculinity represented by the father and femininity represented by the mother.

Joint statement against the guidance

A range of LGBTI organizations have spoken out against the guidance, but Intersex Human Rights Australia (IHR) took the initiative to draft a joint statement against it. The statement focuses on the existence, discrimination and rights of people with intersex conditions. This makes it a strong new case, because LGBT organizations already have advocated for equal rights on sexual orientation and gender identity before.
GALE has signed the joint declaration as an organizational ally.

Sources: Vatican, “Male and female he created them. For a path of dialogue on the issue of gender in education”, Ottowa Citizen, IHRA