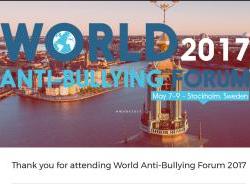 27 June 2017 - Last month, the World Anti-Bullying Forum conference in Stockholm, against expectations, featured attention to homophobic bullying is several ways. The WABF was the first world conference on bullying and it was not expected to give very much attention to homophobia. This expectation was mainly because the traditional definition of bullying covers only personal interactions between students without attention to motive or normative context. However, this was challenged in different plenary sessions and workshops. The initiated discussion may lead to a need to review the current definition of bullying.

The conference opened with an video message by Marta Santos Pais, the Special Representative of the Secretary General (SRSG) on Violence against Children. She highlighted the role of bullying based on non-conforming gender behavior; she stressed this main type of homophobic and transphobic bullying is a part of gender issues. This is a strong argument to legitimize attention to in the global political arena.
The first plenary keynote speech was given by assistant professor Jun Song Hong who practices at Wayne State University, USA and Sungkyunkwan University in Seoul, South Korea. He gave an overview of homophobic bullying research with examples from different countries. His speech also included concrete examples of how homophobic and transphobic bullying works out in practice for students. In this way, it was a really good introduction for a world conference like this. One of Hong's concerns is the lack of implementation of anti-homophobic bullying policies. In a 2015 study in Michigan (USA) only 50% of the students said it was actually implemented and they maintained the school culture did not change.

Ambiguities in State policies and their implementation

In one session, John Palladino and Mark Giesler from Michigan, USA reported on their research on how school counselors deal with different expectations of anti-bullying policies. For example, gay boys want help with coming-out to their parents while bisexual girls prefer cognitive-behavioral interventions in school. Supportive parents want punishment of bullies while administrators want punishment which conforms to the specifications of the State code. School counselors try to adapt to these different expectations.
Cyber bullying was most prevalent among 9th grade girls. Some of them identified as bisexual or played with it online. Girls set rules among themselves on how to play this game. When one of these girls breaks these implicit normative rules, this results in "mean" girls cyber bullying her. On the other hand, gay boys prefer to cyber date online rather then play around with identities. The closeted boys are more victims of cyber bullying. These different types of bisexual girl- and gay boy bullying do not correspond well to simplistic State bullying policies. These policies focus only on zero-tolerance and punishment. But zero-tolerance does not work in this context.
School counselors try to solve these dilemma's which a kind of "street-level bureaucracy". They try to figure out for themselves what to do. For example, they say: "I just stop talking about bulling, because then I become a kind of police officer, which does not work. Instead, I talk with students about meanness. Then I can counsel them without having to resort to formal zero-tolerance punishment. Palladino and Giesler conclude we need to better understand the role of counselors and to empower them within this framework.

In another session, Peter Dankmeijer of GALE criticized the "one fits all " suggestions for State or school-level policy. GALE analyzed the Right to Education and its implementation in worldwide and discovered that implementing sexual diversity policy in denying, ambiguous or supportive States, or schools, is very different. It needs to be recognized that one ideal type policy cannot fit all these situations. In each situation, different goals and strategies are needed to make steps forward. GALE recommends that the movement to combat homophobic bullying takes the strategic process going on in States and in school more into account. GALE announced the publication of the strategic guide, that was published a few weeks later.

A need to change the definition of bullying

In a plenary panel discussion between some of the global celebrities on anti-bullying research, the definition of bullying and the way forward were discussed. Elizabeth Pen developed an anti-homophobic bullying program in New York and researched it. She criticized the current definition of bullying.
The current definition focuses on the micro process between the perpetrator (bully), the victim (bullied) and different types of bystanders. Research showed that empowering victims or punishing bullies do not yield significant results in group processes. In the anti-bullying strategies of the last ten years , the focus is on changing the behavior of the bystanders. Changing the behavior of bystanders, with a focus on group rules of behavior, turns out to be much more effective.
Elizabeth Pen said structural processes of social exclusion like homophobia are not really considered with this perspective. First, the current bullying strategies presuppose that bullying is a kind of neutral mechanism independent of who are in the groups. Although anti-bullying researchers note differences in bullying between girls and boys, they do not really recognize that the gender differences may require a fundamental different outlook on bullying. LGBT youth are commonly not even recognized as a relevant group. Homophobic name-calling is seen as a form for bullying when it targets a specific victim, but when a majority of boys use name-calling all the time to police masculinity, this type of generalized and socially supported negative behavior simply does not fit in the current definition of micro processes. Pen suggested that bullying is not just a neutral micro social process, but an expression of social struggles for power. In these struggles, masculinity and the degradation of femininity as "weak" plays a central role. For example, she thinks that bulling of overweight children represents the rejection of non-heteronormative bodies of boys and girls. Therefore she suggested that a revised definition of bullying should recognize "that the norm of heterosexuality underpins all forms of bullying".
Dan Olweus, the Swedish "father" of the anti-bullying movement and the inventor of the current definition of bullying would have nothing to do with this. He maintained that homophobic bullying is just one of the behavioral expressions of bullying in general. But he did not go into the examples of discriminatory bullying that simply don't fit the current definition. Another famous US researcher, Dorothy Espalage, did not criticize the necessity of a revised definition, but the consequences. At the moment, most research on bullying is beased on the Olweus definition and the proposal of Pen would require a whole new set of validated question batteries. How to reliably measure the norm of heterosexuality? Espalage is afraid the broader definition will lead to a slippery slope. If we call any negative behavior bullying and a breach of rights, it will be more difficult to measure and to show whether anti-bullying programs are effective. Elizabeth Pen responded that her groups wants their interventions to address structural and normative processes that disproportionally affect bullying. In the current programs, this is ignored and that needs to change. As a last resort, Olweus stated that anti-bullying researchers need to keep to the current definition because "we need a framework that also policymakers can agree on".
Peter Dankmeijer, GALE director commented on the discussion afterwards. He said that the proposals of Elizabeth Pen were groundbreaking and an important argument for revising the current definition of bullying. He thought that the counter arguments of Olweus and Espalage were not proper responses to the issues Pen was addressing but seemed more a concern to guard the current status quo. He thought Pen's suggestion to make heteronormativity the key to all power struggles and bullying may go a bit too far. While heteronormativity covers the background of a large proportion of bullying, it is questionable whether bullying of overweight children can mainly be framed as heteronormative. He believes that we probably have to look deeper into emotional processes of rejection of the non-normative in general rather than only heteronormativity.