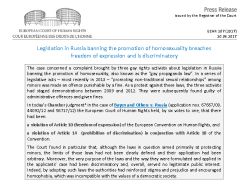 Censorship law does not protect morals

Three human rights defenders filed complaints on the matter in 2009 and 2012. They said the law violates their right to freedom of expression and was discriminatory. The Court has now ruled in their favor. The Court said this legislation does “not serve to advance the legitimate aim of the protection of morals, and that such measures are likely to be counterproductive.“
The verdict says that “by adopting such laws the authorities reinforce stigma and prejudice and encourage homophobia, which is incompatible with the notions of equality, pluralism and tolerance inherent in a democratic society.”

In the Russian Federation, education about sexual diversity was completely impossible because any neutral or positive information for youth was considered “propaganda”. The verdict also may become a precedent for rulings on other countries which imitated the Russian censorship law.
The decision is binding for Russia, but the government has already pledged to appeal the ruling within three months.