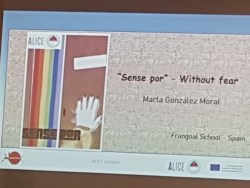 12 January 2020 - The final conference of the ALICE-project led to students coming-out. The project promoted “prosociality” as a positive way to establish safe and pleasant school and community cultures. Although is was not specifically focused at combating bullying or discrimination, the both positive and generic way seemed to create opportunities to also create space for non-normative identities. That is, if the facilitators have the sensitivity to include diversity topics.

The conference took place on 10 January in Heraklion, the capital of Crete. The results of two years experimenting with prosociality in high schools in 5 countries were presented. At the end of the project, students made a series of drawing and digital images to symbolize what they had learned about prosociality. One of the awarded images was called “Sense por” which is Catalan for “without fear”. It was made by a girl who used the ALICE-lessons to explore her own identity and the safety in school. The schools was proud to help he present an image referring to this (see picture with this article).
Peter Dankmeijer, GALE director, did one of the key note speeches and stressed the necessity to include different kinds of diversity in the general concept op prosociality. The sensitivity of teachers, school leaders and the authorities is essential to create the space adolescents need to develop fully. The speech inspired one of the attending students from Italy to come out as a lesbian to her teachers during the conference.

In this speech, Dankmeijer noted that the ALICE-project focused a lot of attention on the curriculum. He hoped that future projects could also give more attention to how prosociality in integrated in the system of schools. There were several indications that when the school and authorities support integration of prosociality in the school system, this will take prosociality beyond individual teacher intentions. A system approach will support real sustainability of innovations like these. For example, in a school where direct democracy and non-violent communication were part of the system, it was much easier to be prosocial, even without lessons. Coming out or establishing gender-neutral toilets were without challenges in such a school.

Prosociality with one eye shut

However, in schools with a punitive system where students were supposed to conform to standards and nor really listened to, it was a huge challenge to ”teach” prosociality. Students tended to mistrust the teachers’ intentions. They were likely to consider the ALICE-lessons more like an advanced way of forcing them to self-discipline than as a help to be truly prosocial out of their own authentic choice. Part of this general top-down norming is the way such schools take gender and supposed heterosexuality of students as given. In one of the participating countries, the local authorities even went so far to exclude LGBT issues from the curriculum, because “high school students are not ready to label themselves as LGBT”. It was no wonder no students from this country did not express any prosocial concerns about sexual diversity , let be that students came out during the project. Prosociality without integral inclusion of diversity becomes like walking with one eye covered.